* In case of any delay in receiving the OTP, you may verify it later. Please proceed without verification.

Enter your City name or Pincode

Madhubani is part of the Indian state of Bihar situated at a height of 58 meters (183 feet) above sea level. This town is 26 km northeast of Darbhanga town and was formerly the northern subdivision of this district till the year 1972. It is surrounded in the north by the hilly regions of Nepal with Darbhanga in south, Sitamarhi in west and Supaul in the east. Kosi, Kamla Balan, Bhutahi Balan, Adhwara or little Baghmati are some of the main rivers that flow near Madhubani. Also known as Mithila, this district has a unique individuality of its own with the Madhubani paintings famous all over the world. 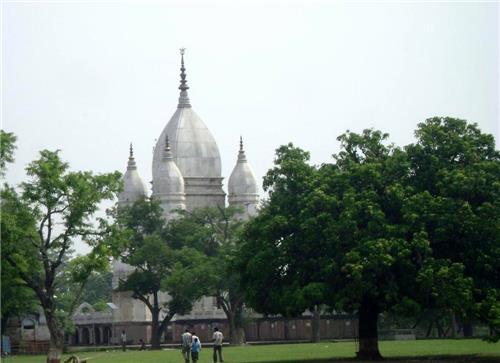 The name Madhubani is derived from "Madhuban" which means "forest of honey” or sometimes also known as "madhu"+"vaani", meaning "sweet" "voice/language. The Lokgeets of Madhubani are based on Hindustani Classical raags and are quiet popular across India with Songs sung by Shardha Sinha are played at weddings, festivals & special occasions. Madhubani is famous for its delicious Makhana and Sweet Water Fish and the smaller varieties are favoured and eaten with much relish. Residents of Madhubani regions are religious, hard-working and traditional. These are peace loving and educated lot & are mostly engaged in trading business. Madhibani attracts tourists with reat archaeological and religious treasures in the form of temples and shrines like Somnath Mahadev Temple, Kapileswarsthan, a Shiva Temple, temple of Ugarnath, etc. So plan a trip to this beautiful town of Madhubani and be a witness to its rich culture & traditions.

As per records no prehistoric sites have been found in Madhubani but some remains of the earliest aboriginal population have been witnessed in some parts of the district. One can trace the existence of Tharus dynasty in the old subdivision of Madhubani; the Bhars & Kiratas also inhabited the district for a considerable period as Mahabharata also refers on the Kirata culture. Prior to the coming of Aryans the phallic worship was also common here which was continued by the family of Janaka pointing to the fact they had to follow the local religious beliefs, dominated by the Shivaites. Later on Bimbisar, the founder of the Magadhan Kingdom and his son, Ajatshatru overpowered the Lichchhavis and captured North Bihar and brought Mithila under the control of the Magadha. The defeated Lichchhavis escaped back to Nepal and Tibet and this marks a great event in the history of North Bihar. Madhubani District being the centre of the region was an important point in this trek as the route to Nepal was through this district.

At the advent of 6th century B.C. the people of Madhubani were greatly moved by the religious & cultural happenings and the teachings of Mahavira & Buddha and actively took part in reform movements. One can find numerous references about Madhubani district and the neighbouring regions in both Jain and the Buddhist literature. After a few years of instability Madhubani came under the Kameshwara Thakura or the Sugauna dynasty after which British took control of the district after winning the famous battle of Buxar in 1764. The residents of Madhubani participated in the freedom struggle with many people joining Mahatma Gandhi’s Khadi spinning and weaving revolution. Khadi became very popular in the region and later on a Khadi centre was opened at Madhubani which led to Madhubani emerging as a popular centre of Khadi production. After Independence Madhubani became part of Darbhanga Division of Bihar state with Madhubani town serving as the administrative headquarters of this district.


Geography and Climate of Madhubani 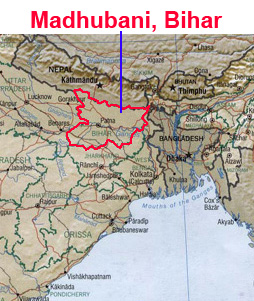 Madhubani is located at 26.37°N 86.08°E and is endowed with vast low-lying plains having many streams, marshes and ridges, occupying an area of 3,501 square kilometres (1,352 sq mi). The district is in parrallelogram shape with the average breadth being a little more than the average length. Madhubani as the rest of India has three well defined seasons; the cold weather begins in November and lasts up to February, with March is also remaining cool. The summers are hot and dry with the Westerly winds & dust storms blowing throughout. The temperature rises up to about 42 degree Celsius in summers; bringing relief is the rainy season which starts in the middle of June. Madhubani gets more rainfall than its neighbouring areas and also receives some winter rainfall. Soil of Madhubani is calcareous which a mixture of clay and sand; majorly it is less of sand and more of clay helping to retain moisture and making it perfect for paddy cultivation. The area falls under flood prone areas with A number of rivers running almost parallel to each other from north to south nourishing the alluvial plain regions of the Madhubani district.

Mahashivratri, Holi, Ramnavami, Durgapuja, Krishnashtmi, Dipawali and Chhath are the major festivals celebrated in Madhubani district with much joy & fervour. The famous Madhubani Festival is an annual fair held at Simri, Bihar and the last one was held for 3 days from 17th Oct-19th Oct, 2014 at Rajnagar Block, Madhubani. The festival garnered immense popularity with nearly 3000 people attending the festival every day. The people stay at artists houses displaying cultural tourism and get a glimpse of the local culture, cuisines & folk-art. A Saurath Sabha is held every year in Madhubani to arrange marriages as per the Panjikaras. Another fair is organized on Krishnashtmi which is attended by large number of people; Idols of Lord Krishna, Nand Baba and other Gods and goddess are made with soil & bamboo sticks and worshipped here.

There are many tourist places in Madhubani displaying its rich religious & historical culture. Andhratharhi, Balirajpur, Mangrauni, Bhawanipur, Saurath, Satghara, Bisfi, etc. are some of the major tourist attractions in and around Madhubani. The best months to visit are from October to March when the weather is pleasant and one can enjoy and explore the place at ease. The famous temples of Bhagwati and the temple of Ugarnath and the Naulakha Palace attract hundreds of devotees to this region. Being well connected to other parts of the country it is a favourite pilgrimage & cultural spot on the map of any tourist visiting India. Madhubani Paintings are an added attraction which draws a large number of tourists, art enthusiasts and painters to this district.


Art and Culture of Madhubani 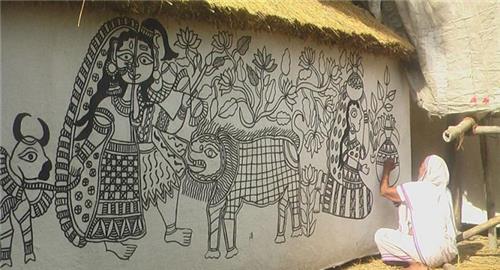 The unique & indigenous style of Madhubani paintings originated from this area in 17th century and has gained immense popularity across the world. The material used for making these paintings are vegetable dyes, lamp black, and the canvas is usually made of cloth or paper. The beautiful ethnic & traditional designs of these Madhubani paintings are quite popular in both Indian as well as foreign markets with people ready to pay huge sums for these paintings. The motifs are also now being used as designs in bags, kurtas and other materials through hand-block printing technique. The people of Madhubani are simple and religious, and committed to keep their customs & traditions alive. Villagers of Madhubani district have Shivalayas where they go without fail to offer prayers and for Jalbhishek in the morning. Maithili is the main language spoken by the people of Madhubani while Hindi English and Urdu are also common among the people of the region.

Madhubani is a shopper’s delight with its unique folk-art, Madhubani paintings & other local handicrafts. A number of many shopping places, fast food joints & cinema halls are now operating in Madhubani thus making it a must visit place which has someone to offer to everyone. One can enjoy local delicacies at the many restaurants & eating joints present in Madhubani. The narrow lanes of the local bazzars like Churi Bazaar, Rahika Haat, Loha Haat, Saharghat Bazaar, Khutauna Bazaar, Yaddupatti Bazaar, Kothi Haat, etc. are a treasure of beautiful souvenirs & local handicrafts.

Madhubani district has a well- developed transportation system and is connected to rest of India by means of road, rail & air. Madhubani Railway station is the main station with many trains passing through and connecting Madhubani to all major cities. The nearest airport to Madhubani is the Muzaffarpur Airport which is about 80.32 kms away and is easily accessible by road. National Highways (NH 104 & NH 105) form the Road network which connects Madhubani to nearby places. Various modes of local transport like Buses, taxis, tempos and autos are easily available to travel within the city. One can choose according to convenience &budget preferences.


Madhubani at a glance